We have a BIG problem

We now live in a world were there is more plastic in our oceans than fish.

Most people are now aware of the huge plastic pollution issue throughout the worlds oceans, seas and rivers. A number of charities, volunteers and organisations are doing great work in collecting floating plastic from beaches, shores and garbage patches. Progress has even been made in trying to stop plastics getting in to the watercourses in the first place.

However, much like the analogy of an iceberg, the real problem is lying below the surface in the form of microplastics. Microplastic comes in a variety of shapes and sizes and comes from multiple sources, what it all has in common though is that the size of this plastic is smaller than 5mm in size and doesn’t float nicely at the top of the water to be collected. What’s worse is that studies studies suggest it’s everywhere; as much as 4 billion microfibers per km² is estimated to be in our oceans!

Research and studies are still being conducted extensively throughout the world by people much smarter than us at Triton, but it should be crystal clear to everybody that this situation needs to change FAST.

At least 8 million tons of plastic end up in oceans every year.

5.25 trillion pieces of plastic waste are estimated to be in our oceans.

It’s estimated that over 4 billion microfibres per km² dwell below the surface.

Unlike some other kinds of waste plastic doesn’t decompose. 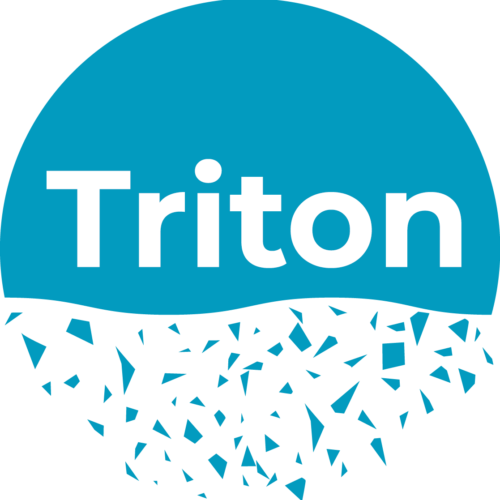 “Triton’s vision & singular goal is to return the world’s oceans, sea’s & rivers to being microplastic free.”

Triton have a solution that will effectively remove microplastics from below the surface of the worlds oceans, seas and rivers.

The Triton system has been developed using the latest cutting edge technology and will remove microplastic from below the surface, cleaning the worlds oceans, seas and rivers and preventing further catastrophic damage.

When we take the microplastic out of the ocean we also remove other stuff such as water, silts and clay. Our system separates this material and returns it safely to the ocean – just without the plastic pollution.

Ok great… so we’ve removed and separated the microplastic, but we need to do more. We want to recycle as much of the microplastic as possible, utilising the recycled material to create new products or for creating energy.